When John, who was in prison, heard about the deeds of the Messiah, he sent his disciples to ask him, “Are you the one who is to come, or should we expect someone else?” Jesus replied, “Go back and report to John what you hear and see: The blind receive sight, the lame walk, those who have leprosy are cleansed, the deaf hear, the dead are raised, and the good news is proclaimed to the poor. Blessed is anyone who does not stumble on account of me.” 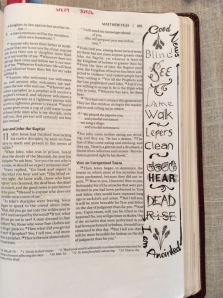 When John the Baptist hears about the deeds of Christ, it prompts him to ask if that ‘anointed one’ happens to be Jesus, his very own cousin. Funny how John didn’t even understand his own words and trust his own senses when a few years prior: “John protested strenuously, having in mind to prevent Jesus, saying, It is I who have need to be baptized by You, and do You come to me? And when Jesus was baptized, He went up at once out of the water; and behold, the heavens were opened, and he [John] saw the Spirit of God descending like a dove and alighting on Him.” (Matthew 3:14, 16 AMP)

John needed proof and Jesus lists off His works as evidence. Evidence that He was indeed the Anointed, the Messiah. Once before, John had heard and seen. I wish it weren’t so easy to forget…

Anyways, I digress… All that Good News on display, that’s what Jesus said we could DO (not reminisce about, wish for or debate.) He said we could have that anointing through Him by the power of Holy Spirit so that Father can be glorified. It’s proof the Father still loves the world.

What if, in this crazy time of social, political and human upheaval, what if the greater works also involve loving without regard to our own needs, serving people we don’t agree with, standing with the currently oppressed, loving our enemies.

How is this broken world going to be healed? By sitting in front of the TV debating whether all lives matter? Despising the candidates and cursing them in the darkness? Yelling across picket lines? Smugly declaring that the world deserves judgment? I’m pretty sure only God gets to decide that. The whole earth is in violent upheaval because it’s been waiting, waiting, waiting for God’s children to realize who they are and DO what we have been anointed to do.

We’ve been given authority and anointing. Let’s spread some Good News, what do you say?