Believe me when I say that I am in the Father and the Father is in me; or at least believe on the evidence of the works themselves. Very truly I tell you, whoever believes in me will do the works I have been doing, and they will do even greater things than these, because I am going to the Father. And I will do whatever you ask in my name, so that the Father may be glorified in the Son. You may ask me for anything in my name, and I will do it. 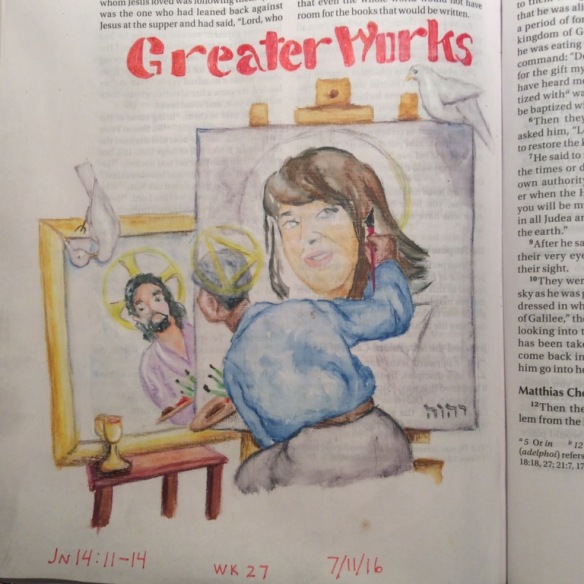 I think it is interesting that Jesus tells the disciple to believe that he is in the Father and the Father is in Him. Such a matter-of-fact statement, as if it was that easy to accept. The God of the universe lives inside their friend AND he lives inside God. That concept just isn’t part of the human experience.

So, just in case he had a hard time swallowing that fact, Jesus explains that the good works He’s been doing all over town are the Instagram stories that prove His claim. You can’t argue with the visual evidence.

What the disciples do know is that Jesus is about to go away, so they are probably a little anxious and confused. What were these last few years about if He’s just going to bail on them? How do you abide with an absent companion? How can they do greater works without Him?

So Jesus comforts them with the knowledge that if he sticks around a better companion won’t be able to come. They need that Friend, Holy Spirit, to help them abide.
Only in the abiding can we leave the brush strokes of the Father on this world.